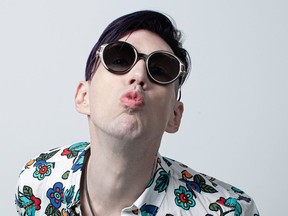 As lead vocalist and songwriter for Marianas Trench, Josh Ramsay has explored everything from straight-ahead rock to love of Goonies-era adventure films in 2015’s Astoria, Ore., and the darker musical haunts of 2019’s Phantoms.

As a producer and songwriter, he has credits from Nickelback to Carly Rae Jepsen. His work on Jepsen’s career-defining Call Me Maybe was a 2013 Grammy song-of-the-year nominee.

His first foray into solo recording was the single We Should Be Friends featured in the film Adventures in Public School. Now he has unleashed a monster of a solo album where he handled all of the instruments, arrangements and songwriting, titled the Josh Ramsay Show.

Boasting 18 tracks ranging from the big band blast of Blame it on the Beat to the tight funk grooves of Perfect Mistake with Rita Mae and even chunky bonehead rockers like the leadoff single Lady Mine, featuring Nickelback’s Chad Kroeger, the record constantly jumps genres.

“I had always planned to put out a solo record where I played all the instruments by myself, wrote, produced and arranged everything, and the pandemic provided that opportunity since none of us in the band could see each other,” said Ramsay.

“The multi-format idea came out of the fact that I couldn’t do another Marianas Trench album without the guys because that wouldn’t be cool, so I had to do something different. That led me to the idea of making every song something different and trying my hands out on a lot of ideas I’d never explored before.”

That sense of play permeates every bit of the record, particularly in the symphonic interludes strung across the album. They form a kind of lead-up to the closing ode Miles and Miles written for his late father, musician Miles Ramsay, who founded Little Mountain Studios. This tune reunites Josh with his musician sister Sara Ramsay. The two previously performed together in Ramsay Fiction.

“I was worried that there would be no way to record with an actual symphony due to the pandemic, so I went online and researched all the best orchestral libraries people were using and bought them all,” he said. “When I finished with the big symphony piece, I kept playing around on the laptop and that is where those three other tracks — Army of One, The Ballad of Cheeky Valentino and The Deep Woods — came from.

“Miles and Miles was epic, where we had to record the entire symphony orchestra in groups of four, which meant a final track list of around 400 to edit together.”

The other string-driven tune is completely different. Spellbound is right out of swinging ’60s London, England.

It was dedicated to Ramsay’s late mother, Corlynn Hanney, whose long career included extensive recording and touring with Leonard Cohen, singing backups for Tom Jones and appearing on the Muppet Show. Hanney was also known as the “go-to” vocal coach for rock ‘n’ roll singers in Vancouver.

“I wanted a pop song in the spirit of All You Need is Love or Eleanor Rigby, where the overdubbed string sections were the feature of the songs,” he said. “Plus, I had to put in one heavy vocal harmony part in her honour, as she was my vocal coach.

“Everything on the album was written with a specific idea or artist in mind, sometimes both.”

One of those was country music star Dallas Smith, who recently picked up four CCMA awards, including his third entertainer-of-the-year win.

Ramsay said he wrote the song Best of Me with Smith in mind from the get-go. Smith felt like he wasn’t just featured on the song, but also that it was written about him. The whole session came together at the Warehouse studio when Josh and Dallas got together to record an acoustic version of the tune and cut the final track at the same time. Both singers laud one another’s ability to nail a number on the first go-round.

“Josh wrote everything ‘in-the-style-of’ and had us come in to record, without having the full picture,” said Smith. “I’m sure that he did his research on me, because there are some Easter eggs like drinks don’t work/ But the drugs might, which feel like they directly apply to me. It’s pretty cool how he just decided to challenge himself to write a bunch of stuff outside of the box and Ramsay says it was pure coincidence that the lyrics seemed to mirror Smith’s life and times. Every one of the guest appearances on the album came about as a result of his writing just winding up fitting the styles of the colleagues he brought in to the project. Some, such as Fefe Dobson, had been in his mind to work with for ages. Others, such as Tyler Shaw, were artists that Ramsay had co-written with before.

Presently on tour opening for the Canadian Tenors, Shaw says the Ramsay album is going to be an interesting one to see find its audiences. Like Smith, Shaw says his part in the song Can’t Give it Up was mostly as a hired hand.

“Josh is such a talented, down to Earth guy that I was honoured to be included on the project, which was really a case of him sending me the music and me recording my vocals and sending it back,” said Shaw. “Everything was so incredibly easy and the results are so good. To be in that positive creative space working with someone that talented is really where you want to be, and I’m impressed with everything I’ve heard.”

Ramsay is delighted with the Josh Ramsay Show. Stepping outside his own box was liberating and inspiring, and he’s curious to see what tracks break where. He also plans to put the material to the test in front of live audiences, forming a band with a number of multi-instrumentalists to make it possible to play the tunes. He needed players who could handle a lot of duties to keep the size of the band manageable.

“I was having trouble deciding which way to go with the size as some songs have full horn sections, backup singers, etc., which makes for a pretty full tour bus,” he said. “Bands like that happened back when the record industry had way bigger budgets. We’re shooting videos for everything before we hit the road too, because you don’t know how things are going to go right now.”